The contemporary city is the pulsating heart of human life. More than half of the world’s population is urbanised and this continues to rise, driven by our insatiable need to build and progress. The city contains all other man-made subjects and with millions of stories unfolding every single day, it has become the most immense of all muses.

Hyperrealists are often influenced by their surroundings and look to evoke feelings of identity and sense of place within their work. Urban hyperrealism takes both the modern metropolis and the mundane elements of city life as its subject. It challenges the artist to observe its diversity and understand the hidden meanings deeply rooted in city society.

Urban landscape is one of the most challenging genres of contemporary art. Major cities have been rendered many times before so producing work that is evocative and individualistic can be difficult. Here we look at how some of the biggest cities and most popular tourist destinations around the globe have been captured by hyperrealists.

London through the eyes of Francisco Rangel

Having graduated as an architect, Francisco Rangel is familiar with exploring a city’s history and development through its architecture. Much of London’s evolution occurred along the River Thames where it flourished as one of the world’s leading trade ports. The skyline of London changes dramatically each decade, but Rangel continues to place his attention on the capital’s waterways.

Rangel believes “bridges are the fingerprints and witnesses of London’s life” and often examines the capital’s iconic crossings in his work. He interweaves local history and socio-political context into riverside environments, enriching what the eye can see.

However London’s architecture often becomes background material in Rangel’s work as he explores the relationship between the natural and unnatural. The city’s sky often becomes the most eye-catching visual, suggesting that there is more to life than the daily hustle and bustle of the modern urban environment.

Paris through the eyes of Nathan Walsh

British hyperrealist Nathan Walsh has a unique method in creating his intricate paintings of cities across the world. Beginning with his own photographic references, Walsh establishes a horizon line and maps out an elaborate geometric blueprint that explores different perspective strategies. He will often repeat this process with more than 100 different images before finally committing to the canvas.

Walsh redraws buildings, manipulating their height or width in relation to other pictorial elements. His recent work deals with layers of information, such as reflective surfaces and the combination of inside and outside spaces. By introducing spatial recession, that is absent in photographs, Walsh presents a world the viewer can enter, offering great potential for a new reality.

In an interpretation of Paris, multiple layers are added to a scene at the Eiffel Tower. An old-fashioned carousel, closed street vendor, pedestrians, busy road and the base of the tower are all presented to the viewer at different distances, demonstrating the many different layers to life in the French capital.

New York through the eyes of Denis Peterson

Denis Peterson is widely acknowledged as one of the pioneers of the hyperrealism movement. His recent works encompass meticulously detailed New York cityscapes that explore the frenetic pace of the modern American metropolis.

People are present in Peterson’s paintings but are caught under the weight of digital billboards that illuminate and loom over the streets they inhabit. This is a commentary on 21st century society and the pressures which people face on a daily basis.

Rendered with magnificent photographic precision, Peterson’s paintings bring the chaos of the street into clear focus, capturing tiny occurrences that would otherwise go unnoticed in the tumultuous flow of New York traffic. 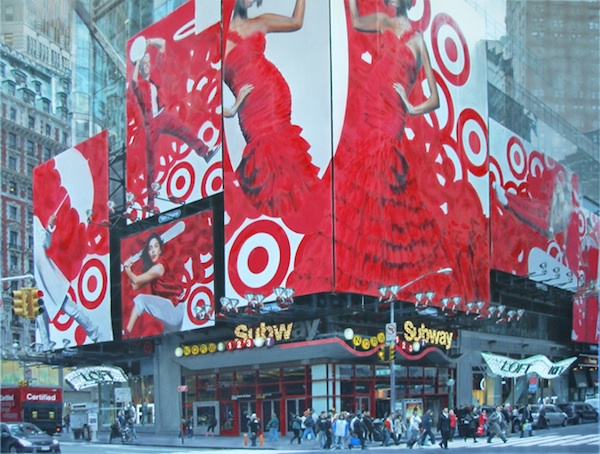 Venice through the eyes of Christian Marsh

Christian Marsh is often described as a ‘humane’ hyperrealist because of his use of people. Humans are not impersonalised in his paintings and serve more purpose than simply clarifying scale. They are instead based on genuine human emotions and concerns, adding an intriguing narrative and ultimately enriching his work.

Italy is the birthplace of geometrically inspired realism and Marsh’s Venetian-inspired work is among his best. He manages to capture the city’s unique beauty while portraying the many stories unfolding upon its iconic Grand Canal. Viewers are provoked into asking who the people are and where are they travelling to. It is this personalisation that makes the painting both physically all encompassing and visually intoxicating.